Hydrofluorocarbons: The Past, The Present, and The Future

The history of refrigeration is a marvel of human ingenuity and problem solving. But the increased regulations and phasedown of HFCs are an opportunity for more sustainable refrigeration.

Over the last 150 years, the technology and innovation that led to the creation of refrigerants have advanced the ways we preserve and cool food, other substances, and ourselves. The first household refrigerator was invented in 1913, with widespread adoption by the mid-1930s. It is now hard to imagine modern life as we know it without refrigeration.

The history of refrigeration is a marvel of human ingenuity and problem solving. From the late 1800s until 1929, refrigeration depended on the use of toxic gases such as ammonia, methyl chloride, and sulfur dioxide, which led to several fatal accidents. Collaborative research by several American corporations solved this problem with the discovery of chlorofluorocarbons (CFCs). Soon CFCs were the standard for almost all refrigeration. Decades later, we realized CFCs wreaked havoc on the Earth’s ozone layer. They were phased out by the 1987 Montreal Protocol and replaced with hydrofluorocarbons (HFCs). HFCs are now found in a wide range of appliances and substances, including refrigerators, air conditioners, and heat pumps. (Visit LibreTexts for diagrams and explanations of refrigerators and heat pumps.)

We now know HFCs are potent greenhouse gases (GHGs). Their release into the atmosphere has an impact on warming our climate several times greater than the same amount of carbon dioxide. HFCs trap heat in the lower atmosphere, causing the earth to warm and the climate to change. HFCs contribute to the effects of climate change and extreme weather events—resulting in public health threats, physical damage, and economic costs.

Recognizing the opportunity to significantly reduce GHG emissions, 15 states, led by California, have acted on HFCs, leading to a patchwork of different requirements prohibiting the release of HFCs and the use of certain products containing HFCs (the North American Sustainable Refrigeration Council provides resources and an interactive map to track regulatory statuses).

To help bring some clarity and reduce the overall supply of HFCs, Congress passed the American Innovation and Manufacturing (AIM) Act in 2020, which among other things authorized the Environmental Protection Agency (EPA) to undertake a series of actions regarding HFCs:

EPA completed the first of these actions—rules to phasedown HFC production and consumption—in September 2021.  These rules phasedown the production and consumption of HFCs by 85% below baseline levels within the next 15 years, establish an allowance allocation and trading program to reduce HFCs, place strict limits on the volume of HFCs that individual companies can produce or import, and create a robust compliance and enforcement system supported by an interagency task force that includes EPA, Department of Homeland Security, and U.S. Customs and Border Protection.

These rules apply to companies who manufacture, import, export, destroy, use as a feedstock, reclaim, or otherwise distribute HFCs. It may also apply to companies who use HFCs to manufacture products (e.g., foams and aerosols). Though these rules do not directly regulate entities that purchase or use HFCs domestically (e.g., for use in stationary refrigeration systems), EPA is working to establish standards for managing HFC use that are expected to be issued in the next year. 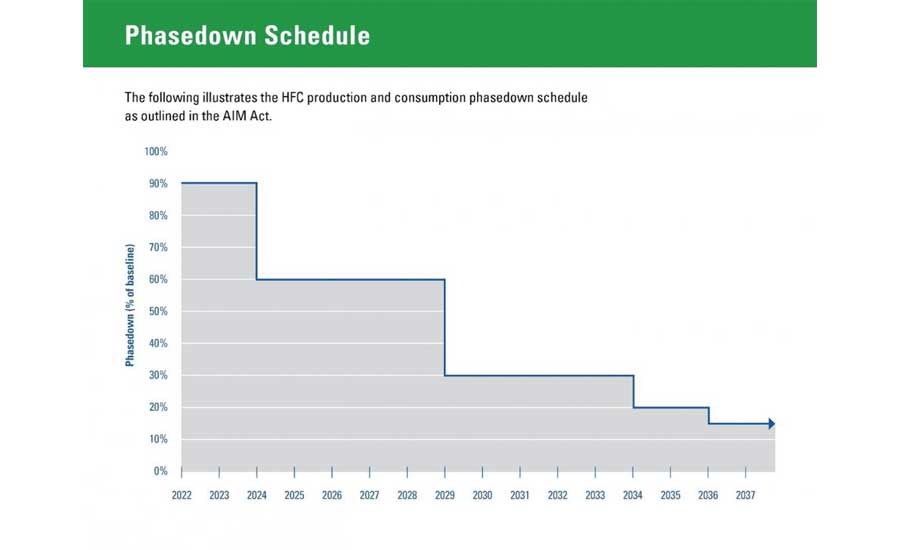 Figure 1 (Courtesy of  US EPA)

The potential cost and liabilities under state law of HFC systems were dramatically highlighted in July 2021 when the California Air Resources Board fined the state’s largest grocery store chain $5.1 million for violating the state’s Refrigerant Management Program. The investigation found such violations as the failure to:

The federal interagency task force has also acted quickly on the new limits on the production and use of HFCs by issuing 14 violation notices to companies that have allegedly failed to comply with HFC reporting obligations under the EPA’s Greenhouse Gas Reporting Program and preventing illegal HFC shipments equivalent to approximately 530,000 metric tons of CO2 emissions.

The state and federal regulations play different roles but work together to achieve the same goal—phasing out HFCs over time by making it increasingly difficult and expensive to obtain and use them. As with the early lethal refrigerants and later with ozone depleting CFCs, the increased regulations and phasedown of HFCs are both a challenge as well as an opportunity.

APTIM can assist with the data analysis and reporting of your HFC resources and provide technological solutions that reduce labor hours, improve the customer experience, and have a small ROI threshold. Our experienced team of engineers can help support the transition to low-impact refrigerants. For more information on HFC audits or how APTIM can help you develop and implement strategies that support environmental, social and governance (ESG) efforts, energy efficiency and emissions reductions targets, and net zero goals, reach out the APTIM team today.

To learn more about our Environmental Compliance capabilities.